Members of these groups got special signs in their ID´s and get special rights and privileges that Han-Chinese do not get. For example easier access to universities and the one child policy sometimes does not apply for them.

Amongst others we visited the Naxis. The center is the city of Lijiang, which is situated on a high plateau, about 2600 m above sea level in the south easterly foothills of the Himalaya.

The Naxi live in matriarchy. Women work in the highest positions, like judges etc. They also do all the physically heavy duties. Men have got the social part. The befriend others, play together and take care of the grandchildren.

Woodcraft and embroidery are well known, not only in this part of China.

The Naxi still have their own language and script, which is a kind of pictogram. We were very lucky to meet a shaman , who is still practicing the old rituals.

Another ethnic group are the Mosua, who are a group among the Naxi. They lived a very permissive way of life. 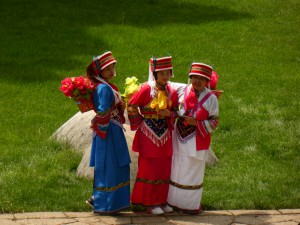 Every man or woman could have had more than just one husband or wife. Marriages as we know it didn´t exist. A partnership could go on  lifelong, but could also just end easily.

Every girl from the age of 18 got her own “flower room”. There she could welcome her lovers.

At a special festival all young people of different villages came together and danced around a bonfire. A girl that liked a boy took his hand. Refusal from the side of the young man was not accepted. That would have meant a loss of face for the young woman. These things changed a bit, the young man can refuse today…

From midnight until 5 am the young man is allowed to visit the young woman in her flower room. To stay the whole night is not acceptable.

Every woman stays with her family, the family house is fenced. The fences are not too high, because the visiting men have to hop over them. Walking straight through the main door is also not accepted, that would be embarrassing for the woman.

But there is one problem. The Mosuo love dogs, so every house is guarded by a dog. The visiting men have to bring some meet for the dogs, so they won´t bark.

Next to the door of the flower room is a nail in the wall. Ifr there is already a hat on the nail, he better turns round and tries his luck with another lady.

There is no word for father in the Mosuo language. Male relatives get all addressed to as “uncle”. All female relatives are “Mums” for the children. All children stay with their mums and her relatives.

In Dali we´ll find the ethnic group of the Bai. We stay there for one night in the Landscape Old City Hotel, which is situated right in the heart of the old town.

Dali has got two parts, the old city is completely surrounded by a city wall. We find lots of nice shops and little restaurants.

The Bai are also well known for their marvelous stone and wood work. Dali is situated next to the 260 km long lake of Erhai. It is so clean that the people living there get their table water out of this lake. For environmental protection only one month per year the fisher men are allowed to fish in the lake and only with very small boats.

The most important cultural landmarks are the Chongchen Temple with the Three Papodas. The biggest and oldest was built in the 8th century, the two smaller ones in the 11th century. All of them have lots of little Buddha statues in the walls. The whole area is a very well maintained park and temple. If you got a nice day, the reflection of the pagodas in the little pond are a nice spot to take some pictures!

You like my blog? That´s fine! Subscribe, so you´ll get an email for the new articles. Or you give me a “like” on my facebook site: facebook.com/gabriela.aufreisen Here you´ll find news, photos and more. See you there!