Norway: The 7 Sisters and their uncountable friends

Waterfalls, Fjords and the Sea

Norway has lots of fjords, mountains and waterfalls, the best known are the “Seven Sisters”.

We arrive in Ålesund with the Serenade of the Seas. A pretty Norwegian city with lots of partly colored art nouveau houses in the city center and a lot more very modern houses in the other parts of the city. The whole city is situated on many small islands that are partly interconnected by bridges. In one of the harbors we see some ferries that go to the other inhabited islands.

Our 4 year old grandson who is travelling with us, is very excited to go to the aquarium. We´ve seen on their website that there is a shuttle bus that stops at the cruise harbor. There also is the main bus station. It should stop by every 30 min, we wait more than an hour but nothing happens. A very friendly taxi driver tells us, he hasn´t seen the bus lately… What a pity! One good thing, the drizzling rain stops and we start our walking tour through the city center.

At one of the many harbors we make a delicious stop at a fishing boat. We buy some gorgeous fresh shrimps! Yummy! Another option is to climb the many steps to the overlooking view point, but that is probably too much for the little one.

So we walk in the opposite direction. We climb a smaller mound. From here we have a real good overview of the city and the surrounding area. (Click here for the view.) Once in a while the low hanging clouds give us a glimpse on the snow covered mountains. Unfortunately we also see dark clouds that come very quickly our way, driven by the sharp wind. We put on our hoods and start a quick descent towards the pier.

During the departure of the vessel the sun comes out again and we get a better view of the snowy mountains.

The next morning starts with a phenomenal view on steep mountains, snow and green grassland. The Serenade of the Seas brought us overnight into the world famous Geiranger Fjord, an UNESCO World Heritage. The weather forecast says 2 degrees Centigrade, so we put on really warm clothes.

Here in Geiranger we can see a lot of waterfalls. Also the obligatory troll is not missing. He seems to be a very patient fellow, he doesn´t grumble at the many tourists that take a picture with him.

We decide to take a bus tour. We buy the tickets at the tourist information and the tour starts immediately.

It´s a scenic tour; the road rises higher and higher above sea level. The view is breathtaking! At our first stop at Flydalsjuve, we are several hundred meters above the Geiranger Fjord. It is as clearly visible as it is our cruise ship. Today she is the only vessel, which makes this stop not too crowded.

We get 10 min to take all the pictures and off we go. Higher and higher we go, quite a while ago we reached the snow line. Our little one has never seen that much snow. Sometimes it mounts up several meters high at the roadside. Sometimes we get a little glimpse of a road sign that is totally covered by snow. Will the snow melt during summer? I can´t tell our grandson. Then we arrive at our highest point during this trip, Djupvashytta; a small hotel, 1030 m above sea level.

We get off, it is really cold, and the snow nearly covers the whole hotel.

Our little one is nearly untamable! All kids in the bus are totally excited about the snow and soon they are engaged in a merry snowball fight.

Unfortunately the bus must turn round. On our way back we see some lonesome huts at the mountain; our grandson says that these are the houses of the trolls…

The melting snow leaves rivulets everywhere on the streets and on the mountains, some are mere droplets, some are powerful waterfalls. Did anybody ever count them?

On our way back we pass Geiranger and again the bus goes uphill, passing many hairpin bends on the so called Eagle Road. Soon we are at our last stop, Ørnesvingen. It snows! From here we have a gorgeous view towards Geiranger, but from the other side then before. (Click here for a short video.)

Beyond us we see many houses, some of them have rooftops that are not only grown over with grass but are flower-decked. Spring has arrived in the valley. From here many more waterfalls are visible. Will they also fall down after all the snow has melted?

Back in Geiranger we decide to take our little one to the kids club of the vessel. He loves to play there with the other kids. We go out again and we start our “climb” up the big waterfall that splits Geiranger into two parts.

The stairs are quite new, they havn´t been there at my last visit to Geiranger. The water splashes thunderous down. The waterfall has many levels; it looks as there would be many more of them, one after the other.

We start the climb. It´s relatively steep. We take our time, having lots of breaks to take pictures or just to admire the beauty of nature. (Like a video? This way please.) A bit of physical shape is required for climbing these 327 steps. We are happy that the weather is much better than the weather forecast has said. We often see the sun and it is much warmer than the 2 degrees Centigrade. 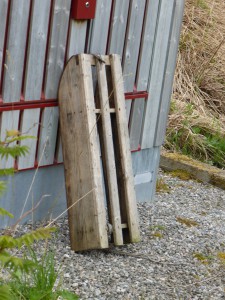 Everybody who made the climb is greeted by an awesome view of the fjord and the surrounding high and steep mountains. It really is breathtaking!

Today the ship leaves earlier than on the past days. Every guest on the vessel should be able to have a look at the world famous 7 Sisters and the Friaren, situated at the opposite side of the fjord.

The captain is going to announce our approach, that will be approximately 20 min after departure. We stay on deck, like most of the other passengers.

Then they come into sight! On the starboard side of the ship we can see them. But it seems as some of the sisters are gone, we can´t see all of the 7 waterfalls that have a height of about 300 m. The snow is not melting enough so we can see less of the seven and even these are fairly thin.

Doesn’t matter! We have seen them before and know that there are really 7 of them and they can be quite impressive.

It´s getting cold and late; so we decide to go down for dinner. During our whole trip we got a nice table at the window in the main restaurant. So many friends of the 7 Sisters are visible, some smaller, some bigger, but all of the Norwegian waterfalls are impressive.

Geiranger was the last stop on our tour along the Norwegian coast and into the fjords. The water is very calm, not only here in the fjord but also on the open sea. So we have a very quiet and sunny cruise back to Copenhagen. In 36 hours we will be back at the Little Mermaid in Denmark!