Dance on the farting Volcano

Who does not look forward to sun and heat during the deepest winter in Germany ? (Zum deutschen Beitrag.) May be not them who like to ski. But unfortunately I do not belong to them.

So I’m very glad to be able to fly with a group of 23 colleagues from other travel agencies, on invitation with the study tours tour operator Studiosus to La Réunion and Mauritius. Both islands are only about 200 km apart in the Indian Ocean, not far from Madagascar.

Here is now the height of summer and the rainy season, but it’s warm all the time. At the airport we get greeted by our Studiosus guide Bernd Bierbaum, who is amongst other things a well known writer of travel literature.

After a stroll through the town of St-Denis, we cross the most expensive piece of road in Europe (yes La Réunion belongs to France) to our location Hotel Lux St. Gilles.

A bath in the huge pool or snorkeling on the reef, which starts at the hotel, will bring back some life into our bleary-eyed group.

Nevertheless, we go to bed early after a delicious meal at the beach restaurant of the hotel . The next morning Bernd wants us to get to know the island a bit better with a hike on the very active volcano, called “Piton de la Fournaise”, also affectionately spoken of the “farting volcano”. Why farting? Again and again mostly smaller lava flows break out of it. It is closely monitored, so our walk is a very calculated risk.

We start very early, because we have to drive about two hours. On the coast highway, the road of tamarind, we go to St-Pierre and turn to the left there. At the elongated town of Le Tampon, that has nothing to do with the same named hygiene products, the road winds up higher and higher. The higher and the closer we get to the volcano, the sparser the vegetation gets until it almost disappears. Here the last eruption is not so long ago as the first mosses or lichens could not gain a foothold by now.

At the edge of the giant caldera, its diameter measures almost 10 km, we leave the bus at the lookout Pas de Bellecombe. Now we have to put on hiking shoes, bring rain gear and especially good protection against the merciless burning sun.

The weather here is unpredictable, early appearing is a chance to experience the volcano cloudless. Mostly, the summit is wrapped in clouds later in the day. But all the way up, we do not want to hike anyway, because there is not enough time.

The view over the rim of the caldera is breathtaking. So I would probably imagine the surface of the moon. Without vegetation, empty, reddish to black, to cut it short: hostile. For nothing in the world I want to miss the hike down into this desolate and so completely opposite scenery of the otherwise so incredibly green island.

But to get there, we almost have to go 200 m straight down. A footpath, counting the steps I eventually gave up, leads down at the rim of the caldera. Along the way, even some bushes and shrubs grow.

Wow, my legs hurt! Once at the bottom I hate to think of the way up, because here is no other way that takes you back.

I stand on the solidified lava. From above it seemed so flat. However here I see how uneven and fissured it really is. Spiky edges, wide columns, steep and smooth plates I can see. 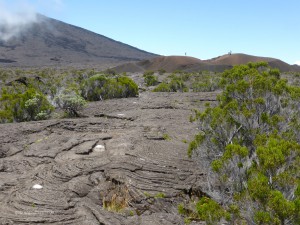 The trail is marked with white stripes. You have to follow it, then the crossing of the plain is relatively risk free. Nevertheless, I look at each step that take, I jump over small gaps and climb over small hillocks. Again and again I am glad that I am wearing my solid walking shoes.

On the small crater Formica Leo Bernd tells us something about the different kinds of lava that can be found here and which have Hawaiian names.

We see the Pahoehoe with its ropy appearance and the Aa forming sharp-edged chunks. We continue. It is hot. Clouds have wrapped around the high crater. Do I need my raincoat soon? Hopefully not.

After approximately two kilometers we reach the Chapelle de Rosemont, a volcano wall, which looks like a chapel, with entrance and windows. Inside countless volcano stalactites hang down the ceiling. This is the end point for today, from here would start the real climb to the 2600m high crater rim.

So far, I have already got a wonderful impression of this unique landscape. Even the clouds are gone. What a majestic sight of this active volcano I get!. Although it is only the second day of this trip, for me personally it might already be the highlight. To this I was so much looking forward! 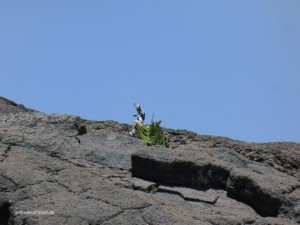 And then I see something that I did not expect in this remote area. A little flower clings in a sheltered corner of the lava. When will it happen that everything is green again? Does it take another 100 years? 200? 500? Will a new, larger volcanic eruption destroy the first timid attempts of vegetation again? Who knows!

The way back to the foot of the caldera rim is relatively simple, on the stairs I pant pretty neat, but at least the path is mostly in the shade and I still got some water.

Shortly before our departure clouds come up so that the whole landscape is wrapped in fog. Then rain starts to pour down. How lucky we have been! Now I close my eyes and dream of a dance on the volcano …