On the island of the 7 earths

Mauritius – the volcano island in the Indian Ocean

Some colleagues from all over Germany  and I got an invitation from the tour operator Studiosus to visit not only La Réunion, but also Mauritius, which is only a short flight away. Our airline is the Air Austral for the flight from Paris to the islands.

This blog post contains unpaid advertisement and affiliate links. The invitation of the tour operator doesn´t affect my own opinion.

In the north you will find our hotel, the Lux Grand Gaube. It is a spacious hotel with a private bay, in which you can swim well, even without bathing shoes, since the coral reef grow near the beach.

As the island’s airport is in the far south, we make practically an island tour on the ride to the hotel.

Bernd Bierbaum, our Studiosus guide and among others also a travel literature author tells us a lot about the island. I never thought that here grows that much sugar cane. Everywhere these fields, but in the humid climate here that is probably the optimum cultivation product.

Traveling and listening makes you get hungry. Bernd has chosen a very special cafe for lunch time for us. I have to chuckle when I see the sign at the entrance. “Viennese Waltzing Café”, so really typical for Mauritius, right? It is managed by people of Indian origin, there is even Sachertorte, but we eat chicken curry. Actually this combination is quite typical of Mauritius, for many years the different cultures and religions live on this island quite profitable next to and with each other. So does peaceful cultural exchange work. Everyone accepts everyone as he is and adapts what suits him. Since we’re here, we walk by the

that is situated just around the corner. About 80 species of palm trees grow here. I especially like the lotus pond and the lily pond with its giant leaves of the Amazonian water lily. Here comes the link to the garden.

Finally it goes to the hotel where we move into our large room with the open bath. On the next day we have to get up quite early. Nevertheless, I enjoy the fresh crepes with delicious fruit before we set off.

Via Port Louis, where we stroll through the market (of that soon more in my next blog post), it goes on to the south. The island is not that big.

a volcanic lake, we look at a Hindu shrine that shows two 32 m high Shiva statues, of which one is still under construction. We visit also a shrine, in which I get blessed with a red mark on my forehead.

Along narrow streets it goes up and down hills, until we come to the village Chamarel. Through a pineapple and coffee plantation the bus drives us to the at 83 m highest waterfall of Mauritius. A beautiful sight, as torrents of water cascade into the depths. At the moment it is the rainy season,so plenty of water is roaring down. 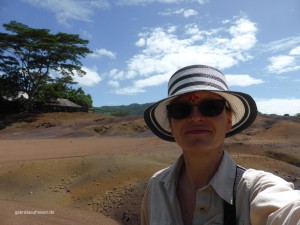 We stop only briefly, because we also want to see the

These are gentle, completely bare hills, colored in various shades which is probably the reason of different minerals in the ground. Depending on the position of the sun and light intensity the colors vary from time to time. 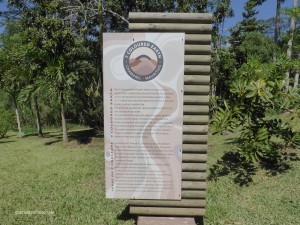 Next to it a small enclosure is situated here with large turtles that lived here in former times, until “clever” sailors used them as a cheap food source and exterminated the animals. 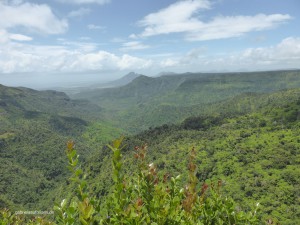 On it goes, the mountains up and down until we get to the Black River Gorges viewpoint. We now have a wide view over the island. So much green! A bird of prey is circling, perhaps it is even one of the rare Mauritius kestrels.

We often stop good viewpoints on our return to the hotel. On this island you should really do more than just laying on a lounge chair at the beach and hope that at the eveningyou do not look as red as a lobster like the personon the next deck chair. One thing everyone should know here, even if the sun hides behind clouds sometimes, it is still there and burns anybody merciless who does not protect himself.

Next week I’ll tell you a little more of beautiful areas in Mauritius. If you do not want to miss that, give me a “like” on Pinterest, Facebook or Instagram, where I post new pictures again and again. I’m looking forward to see you there!

By the way, did you know that Mauritius earned the 7th place of the world´s most beautiful islands in 2016 at Tripadvisor?