Through the hunger steppe to Samarkand

On the ancient Silk Road from Tashkent to Samarkand

The third day of the tour through Uzbekistan starts early. (Zum deutschen Blog.)Today my clients and me drive from the capital of Uzbekistan Tashkent to the second largest city in the country, Samarkand. We are traveling on the ancient Silk Road .

This blog post contains unpaid for advertisement and affiliate links.

Trading is still popular in the bazaars, even the kind of traditional clothing that is also sold there, could formerly and today be very similar. We quickly leave the capital behind us and go through the still very rural landscape of Uzbekistan. Only 37% of the total population of about 31 million inhabitants live in cities, nearly two thirds live in rural areas.

Again and again we encounter small two-wheeled donkey carts with different loads. I do feel sorry for the small gray animals when they have to pull their heavy burden.

However, the human rural population has to work very hard as well. In 1991, after the independence from Russia people have to plow the fields by manpower, because the Russians took their machines with them. 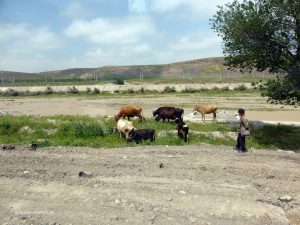 We constantly see people who work with the hoe seemingly endless fields, farmers who walk behind a horse with a plow before they start the new sowing. Many cows and shepherds allow their flocks to graze beside the highway. Sometimes they have only one or two animals, but they are valuable for the families. Driving fast is not possible, because there are many potholes and cracks in the pavement.

The landscape here in Tashkent and quite a bit further towards Samarkand is quite flat and perforated by numerous canals. There are only few major towns we passed through. Many newly built settlements which all look the same, offer the rural population a modest degree of comfort.

Approximately halfway begins the so-called Hunger Steppe. In the past, people travelling through this hunger steppe could really starve and die of thirst, because there was hardly any water, only steppe plants thrived here.

By created channels, the country is now very fruitful. Mulberry trees grow, which serve as food for silkworms, wheat and cotton are grown. For cotton harvest, students and civil servants come to help, because the machines no longer exists, that helped the farmers in Soviet times to harvest the cotton.

After a nearly five-hour drive we reach Samarkand. Its altitude is 725 meters and a warm breeze greets us. We eat the typical Lagman soup, with noodles, vegetables and mutton. Saturated we climb the stairs to the observatory of Ulug’bek, built between 1424-1428.

There is not much to see, but the museum explains very well the former construction.

Our last visit for today is the necropolis Shohizinda, which translates as the “living ruler”. (To a short video for an overview.)

I won’t tell you anything about the history as any good guide book will do that better and in more detail, but I show you the pics that speak for themselves. I can only say, amazing!

Our hotel Orient Star already waits for us with large and clean rooms. After the heat I look forward to my shower.

The evening will be finished with a folklore show (for small film here) and delicious dumplings.

One last highlight we experience at the Registan, when we (also more in the next blog ) come across a gorgeous light show, which was designed by Germans. Wow! 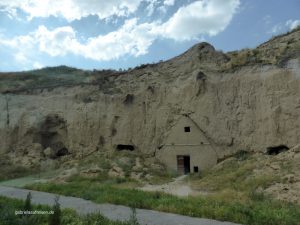