Lots of culture in Chengdu

After 11 hours of sleep I wake up feeling really well-rested. Chengdu, the capital of the province Sichuan wants to be discovered. It is Sunday and our local guide Ms. Ling thinks, that traffic is not too bad today. If she says so…

First we visit the Taoist Temple. It is made of several buildings, each has got a glass cabinet with statues of the Gods. Outside people burn incense sticks in a kind of metal tub.

The oldest of the buildings is about 600 years old. They are mostly made of wood with colorful paintings at the top.

As soon as we leave the Temple district the traffic noise starts again. But it could be worse, because the taxis and most of the mopeds are electrically driven. That lessens the noise and the pollution.

Soon we get off our bus at the oldest part of the city. People who lived here were relocated to new houses in the suburbs, then the houses were restored and now they are housing more or less expensive restaurants, boutiques and other small businesses to relieve the many tourists of their money. 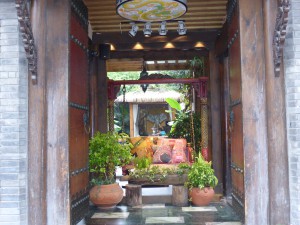 There are also uncountable Chinese tourists to be found here, so we European long noses are a sought-after photo motive. Some ask us in a hesitant English, if we like to get photographed but mostly they ask with hands and feet. That´s how we do it as well. What I like best are the Chinese kids in their “rapid fire trousers”. That´s how they save on diapers…

From here it´s only a short stroll to the “Peoples Park”.

Here we do not only find a marriage market, where mostly mothers try to find a daughter or son in law, but also one of the very popular tea houses. Mostly older people spend their days here with playing Mah Jong or taking. Some people offer traditional Chinese neck massage or ear cleaning. I would say that needs getting used to…

After a short break in our hotel Mercure Chengdu North we head to a restaurant to have a traditional firepot. That is a very famous local dish. It is kind of a fondue.

In the middle of the table is a big gap with a gas stove. They put a big pot onto, in which is a smaller one. In the big one you find a spicy broth, in the smaller one a normal vegetable broth. Both are boiling.

Now you put small meat slices, vegetables, fish or eggs inside. With a dipper you´ll take out what you like. It´s very tasty!

Then it´s time for the Chinese Opera! It´s very different from our opera. I think it´s much more a kind of Variety Theater. 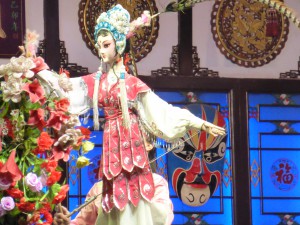 Before the spectacle starts one can see how the actors get their heavy make-up or get one yourself.

Due to the climate, the building is open on one side, people sit at tables, and one can eat, drink, get a massage or get your ears cleaned. All during the performance. 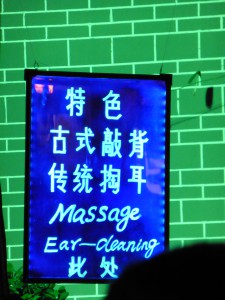 The actors sing, dance and perform mask changing so fast, you can´t see how they do it. There is shadow play and puppets on a string.

Most of the plots are universal, it´s easy to understand with no knowledge of the Chinese language.

That´s a lot of culture, tradition and entertainment for one day, really something special! 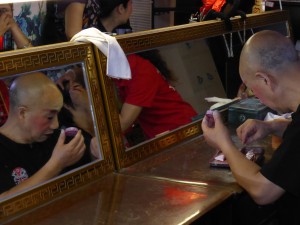