Mishaps on the way to Paradise, Part 2

Will we arrive in Koh Samui today?

The only thing we want is five days on the Thai island Koh Samui, with warmth and relaxation. Normally we should be there already. In our garden villa at the Santiburi Beach Resort & Spa Hotel, but…. We are still in Bangkok. Why? Our flight from Bangkok to the island was cancelled due to smoke that comes from the burning forests in Indonesia.

After all, we got a real good overnight hotel from Bangkok Airways, the “Le Méridien Suvarnabhumi”.

Together with our new travel acquaintances we have a nice breakfast. We decide not to go to the airport earlier, just in case we could go standby on an earlier flight. Instead we enjoy the warmth of the day at the infinity pool. Warmth yes, but no quietness, even the hotel is situated amidst a golf course. Directly at the pool a part of the hotel gets renovated and that is loud.

We have to leave the room at 1 pm. After a long lunch break the four of us decide to take the shuttle to the airport at 4.30 pm, even the rebooked flights starts at 8.15 pm. You´ll never know…

Instead of being at the airport at 7 pm we are at the check in at 5 pm. The lady tells us that our flight is delayed to 9 pm. No!!! Not again!

I beg her to look at any earlier flight and she finds two seats at 6 pm. We´ll take them! 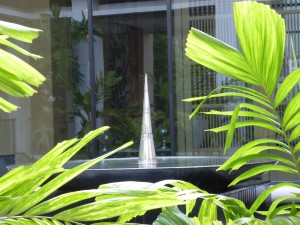 I expect that the rebooking is easy and fast. Far wrong. It takes ages. She contacts her colleagues, than she goes, her shift is over. I can´t believe this! The next agent looks unbelieving and asks her superior. He also beats the keys of his keyboard hectically, nothing happens.

Our new acquaintances already have their boarding passes for the late flight. Meanwhile half an hour has passed, we still stand at the counter and three agents are beating their keyboards. Their looks get more worried every minute. Nobody talks to us. Our suitcases should long be gone, the boarding time of 40 minutes in advance is long gone.

Do we have any reservation at all at the moment? I nearly get sick….

Then their faces light up, the labels for the suitcases get printed and our boarding passes as well. We read 6.30 pm now. Doesn´t matter, we got an earlier flight! We say good bye to our new friends, they will go to the airline lounge.

We head to the passenger controls and run to the gate, which is about 650 m away. Doesn´t matter, exercise is healthful.

At the gate nothing is happening. Should not start the boarding soon? We sit down, I phone the hotel to reschedule the transfer car. Nothing happens. 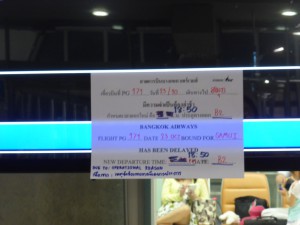 I see an agent going to the electronic display panel. She got a piece of paper in her hand. I follow her. The electronic panel still shows the original time which is already gone.

What is written on the paper in very small letters? The departure time is delayed for 20 minutes. Funny that nobody loads the suitcases into the waiting aircraft. A cleaning car has left and everything is dark outside.

Suddenly our new friends stand in front of us. An agent has hunted them down in the lounge to rebook their flight to ours. The late one is cancelled. I can´t believe this! What would have happened, if we would have come to the airport two hours later? Another night in Bangkok?

Still no announcement about our delayed flight, nothing happens at the plane outside. The agent again goes to the display panel. The departure time should now be one hour later.

Finally there comes an announcement, boarding will start in 10 minutes. I do believe this, they start to load the fright into the aircraft.

The doors open and we get into the plane. 45 minutes later, after full service with dinner and beverages, a good job in this completely fully booked A 319, we arrive at Samui Airport.

Little open cars bring us to the baggage claim area. 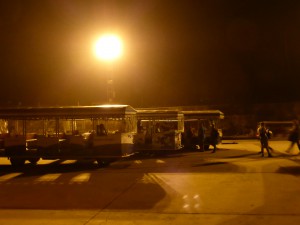 Have we really arrived? I still can´t believe this, 24 hours too late. 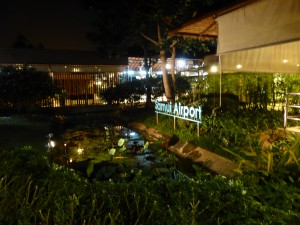 Our drivers waits for us with a name plate and some cold water. That´s good! We don´t see much from our final destination, it´s pitch dark.

At the hotel we get a warm greeting with a flower bracelet and a refreshing drink. The formalities are done fast and we get escorted to our garden villa.

After a journey with so many mishaps this seems to be paradise for me.

Is this so? Here you´ll get more of our trip to Thailand next week.

More information and new pictures you´ll find on my facebook site and on Instagram. See you there!