Snow in August at the Yukon

From Whitehorse to Haines in Alaska

Yesterday we arrived in Whitehorse in the Yukon Territories, Canada. (Zum deutschen Blog.) Our drive to Skagway in Alaska today is less than 200 km, so we take our time here in Whitehorse. Late in the evening we will get on the ferry to Haines, which is only an one hour trip, on roads over land we would need a whole day and many hundreds of kilometers. That happens when some mountains block the way!

This blog post contains unpaid for advertisement and affililate links.

In the morning I look out of the window. The mountains that surround Whitehorse are definitely whiter than yesterday and the snow is deeper down in the valley. Did Winter arrive that early? It´s not even September yet!

The wind blows bitterly cold and we are looking for a breakfast place. Somebody suggested a bakery that should be sensational. Closed on Mondays, so we go on. Nearly directly next to our hotel, the Westmark we see the “Burnt Toast Café”. Hopefully it´s better than the name says. Yes, it is. Breakfast is really good and fresh.

After this hearty breakfast we stroll around Whitehorse. We go down to the riverbank of the Yukon that flows very fast. The trolley that drives along the riverbank moves out of the depot and stops for a moment at the Whitepass and Yukon Route station. The wind is so cold that we decide to get the car and drive on to Skagway. We know the place as we have been there twice on a cruise.

Our first stop on our way is at the Miles Canyon, a very narrow passage of the Yukon where in former times lots of boats shipwrecked. First we look from above at the canyon with its pedestrian bridge, and then we head down to the river. I wouldn´t like to fall in these rapids, many have lost their life in them.

We go on, over the mountains. Shortly after leaving the Whitehorse area the surroundings get whiter and whiter. A lot of snow has fallen down last night.

We have lots of time today, so we stop again at Caribou Crossing Trading Post. We could to a sledge dog tour but it rains so heavy that we would look like pigs afterwards. So I cuddle with the puppies and we visit the Arctic Museum, where they show stuffed animals that live here and up north. 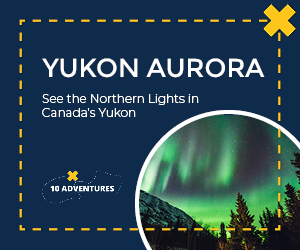 We drive on. Our next stop is not far, it´s the supposedly smallest desert in the world, the Carcross Desert.

We pass the old railway station of the Whitepass Railway. The road meanders along the hill sides. It´s a pity that it rains, the view might be a lot more spectacular. Near the Yukon Suspension Bridge the clouds open up. We are free from giddiness so we pay the admission fee and  walk over the pedestrian bridge that stretches over the Tutshi Canyon.

Many signs show how it was here during the gold rush, it must have been a real tough time. At the bottom of the canyon the Yukon river bubbles and gurgles, no wonder that people built the Whitepass Railway to bypass this unnavigable  part of the river.

Shortly before we cross the frontier to the US we drive through the “Tormented Valley”, an environment that looks like a moonscape.

At the frontier nobody really cares for us and we´re back in Alaska. From now on we mostly drive hill down, along steep mountainsides and again and again we see the tracks of the Whitepass Railway that seems to be glued to the hillside. At that time it really was a masterstroke.

At last the rain stops when we arrive in Skagway. We already know this little town from two previous visits during a cruise, but we look forward for our stroll around town. Some things have changed, but most we recognize. There are still 2 big cruise ships in the harbor but most people are back on board, so the towns people have their place back for themselves. It´s so quiet now!

After a bit of shopping we stop by at the “Brewing Company” where we have real good smoked salmon and burgers.

Soon it´s time for the ferry to Haines. It gets dark and I´ve got the feeling that the ferry will never leave the port in time, as the embarkation lasts so long. But at the appointed time 9.45 pm the ships horn blows and we are on our way through the Chilkoot Inlet to Haines.

Shortly after leaving the harbor it´s pitch dark and millions of stars sparkle in the sky. Outside on deck it´s damned cold. I´m happy that the ferry has enough warm places inside, even staterooms are available for those, who drive further on.

After an hour we arrive in Haines. The ferry terminal is some miles outside of the town.

The Halsingland Hotel lays in the dark, only the lobby is illuminated, but the door is open. An envelope with our name gives us directions to our room. Here people trust one another.  The hotel belongs to Fort Seward and was built at the beginning of the 20th century.

Tomorrow we will cross the border to Canada again. Read more about my road trip soon.